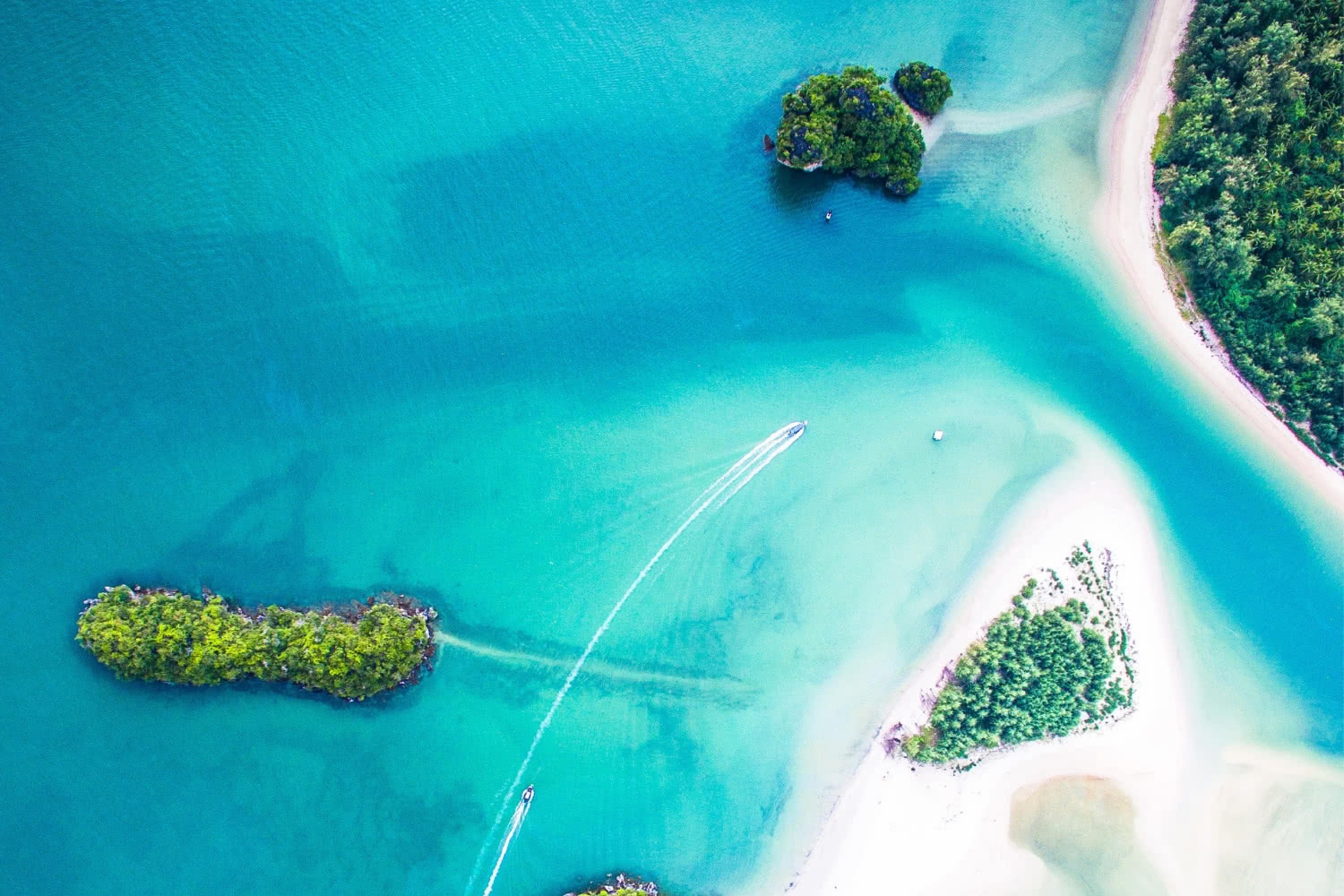 Bonded to a Benchmark?

Why an active approach to fixed income may pay off

Benchmarks are commonly used to measure performance. However, this approach may be problematic in fixed income investing and how to track performance and find returns when investing in bonds.

In fixed income, the Bloomberg Barclays Global Aggregate Index is one such benchmark. It contains a wide variety of bonds including those issued by governments, sovereign agencies and municipalities, and corporates. Each bond is weighted by its size, which means the largest bond issuers are those with the largest index representation.

Passively tracking the benchmark in fixed income means investing in the largest issuers, which may expose investors to unnecessary risks. Figure 1 below shows the country of risk grouping in the Bloomberg Barclays Global Aggregate Index. Notice the predominance of the United States and Japan, which are two of the largest issuers of sovereign bonds. 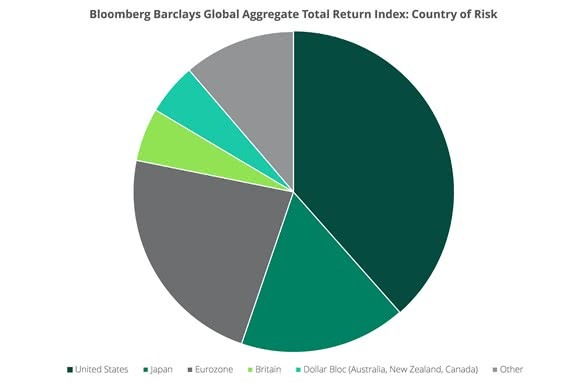 There are several issues with taking a passive approach to fixed income investing and using the benchmark to define success, and investors need to be aware of the following when tracking an index.

Issue 1: Outsized investments in the largest issuers of debt

This is an important flaw of benchmarks in the fixed income universe. An entity issuing a bond is, all else being equal, increasing its debt. The more bonds that a company or other bond issuer has outstanding, the greater the representation that issuer will have in the index.

Investors who follow fixed income benchmarks are often compelled to invest ever greater amounts of money in the bonds of issuers with large amounts of debt already outstanding, eschewing more attractive risk-adjusted expected returns elsewhere. This clearly fails the common-sense test. In fact, the optimal approach to fixed income investing leads to the exact opposite situation, whereby investors allocate more cautiously to entities with more debt outstanding. Why? There are two main reasons that are best illustrated by comparing bonds to equities:

Given the asymmetric risk profile of bonds it makes no sense to make large, concentrated bond investments. There is simply no likelihood of this sort of substantial upside performance that might justify an investor taking this sort of risk, and this is particularly the case where credit risk is heightened because an issuer already has a lot of debt outstanding.

There is a huge diversity of issuers in the bond market for investors who are sufficiently resourced and incentivised to look for good risk-adjusted returns. This illustrates another problem with indices in bond markets: indices have become less representative of the rich opportunity set available, because increasingly they have become dominated by the issuance of large bond issuers, like governments. There is no single index that does a reasonable job of representing the very large investable universe, both locally and offshore.

Investors who use benchmark-focused approaches are suffering a meaningful opportunity cost. The index dictates investment decisions that should be dictated by careful research of whether risks are being adequately compensated.

Bonds will typically be issued when an issuer considers the cost of doing so to be low. Lower cost issuance means lower expected returns for investors and when investors bid up the price of some new issues because of likely inclusion in an index, expected returns are reduced further.

Once a bond enters a benchmark index, this cycle of perverse behaviour can continue. Consider what an investor should do if a bond increases in price by more than similar bonds. Given our comments earlier about the significant breadth of opportunity in global fixed income markets, and the limits to upside potential in fixed income investing, common sense might dictate reducing exposure. An appropriately directed research effort is likely to uncover another bond with a similar risk profile that offers investors a better income stream. Is this the course of action a benchmark-hugging investor is likely to take? Perhaps not. Such an investor may feel compelled to do the opposite, because weightings in benchmarks increase with price. An egregious example is the massive issuance of bonds by government issuers engaged in quantitative easing. This has pushed the yields of an increasing basket of bonds into negative territory, as shown in Figure 2 below. Outside of official demand, much of the demand for these bonds is likely to come from investment managers who are beholden to market benchmarks.

Investors who follow market benchmarks are in some cases not even being paid an interest income by some bonds in their portfolio. Instead they are paying bond issuers for the ‘privilege’ of holding their stock so that they can replicate their chosen benchmark as closely as possible. 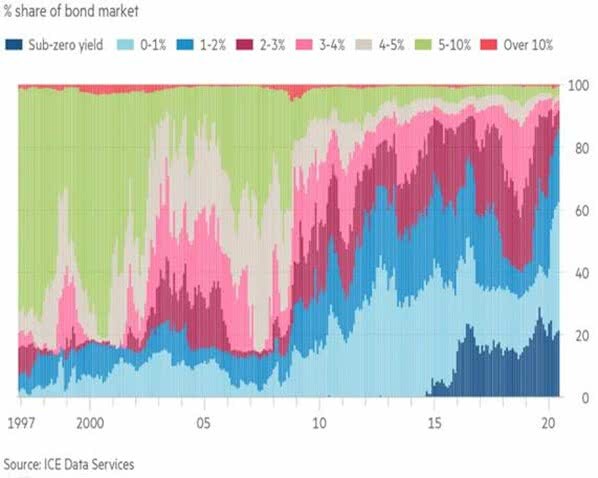 The issue of flawed manager incentives among those who follow a traditional approach to the management of fixed income portfolios extends further. At a more basic level, this misalignment of incentives is at the heart of the rise of absolute return investment approaches. What services should a fixed income fund manager be providing for their clients? A benchmark-focused manager aims to outperform the benchmark; is this sufficient? If an index is down 2% and a fund manager is only down 1% the fund manager will be pleased with their efforts, but will the end investor also be pleased? Investors have many different risk/return preferences, time horizons, and so on, but many view losing money as a poor outcome, full stop. They will not be satisfied if a fund manager outperforms a benchmark yet still loses money. The strong growth of absolute return fixed income funds over time shows that this mismatch between fund manager incentives and investor expectations remains an issue among the end users of fixed income.

The final issue is interest rate risk. Many fixed income indices are biased towards (and often exclusively focused on) fixed rate bonds. For example, the Bloomberg/Barclays Global Aggregate Index mentioned earlier has seen its duration drift from 5.3 pre-GFC, to more than 6 today. This is partly due to issuance patterns through time, but it is also reflective of the market environment because all else being equal, as interest rates fall the duration of fixed rate bonds increases further.

Capital losses are one issue investors are facing; another related issue is defensiveness. Index-aware investment approaches are used by many investors in large part because they expect this part of their portfolio to offset losses in their equity portfolios. Historically, duration has been the most important driver of this defensive behaviour, causing fixed rate bonds to rise in value as interest rates and equity prices fall. But with bond yields at lows not seen for thousands of years (Figure 3), bond prices do not have the same ability to rise as they once had. Of course, central banks in some jurisdictions have resorted to negative interest rates to increase the scope for bond prices to rise. Even then, however, there are greater limits to bond price appreciation now than have been the case for some time. 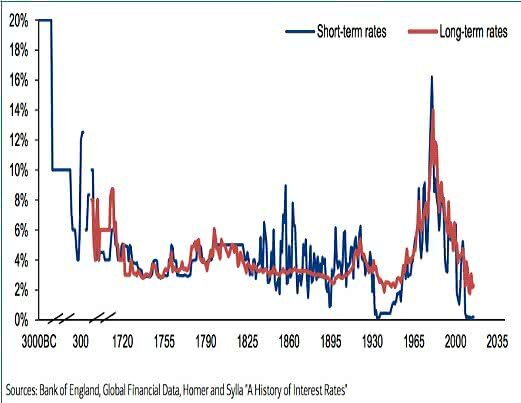 What is the solution?

To overcome the issues of tracking the benchmark, investors may consider two courses of action.

Several index providers have proposed changes to benchmark indices which are designed to address some of the above issues. Such approaches are commonly called ‘smart beta’ and involve altering the weighting methodology used to construct indices. In fixed income, one such change might be to weight bonds in an index according to metrics that impact issuers’ ability to repay debt. Sales, cash flow, or book value of assets are all metrics that come to mind. For example, a corporate bond benchmark may be constructed with larger weights to companies with better cash flow generation. Such a benchmark would go some way to alleviating the issue mentioned above, whereby traditional benchmarks shepherd investors toward companies that have a large amount of bonds on issue.

As such, a smart beta approach represents a more logical choice than a traditional benchmark for a fixed income investor. But such an approach does nothing to address any of the other issues we highlighted. This is why we believe the best way to manage a fixed income portfolio is to remove benchmarks from the discussion entirely.

An investment in fixed income can be constructed in a very risk-aware way without the restrictions a benchmark introduces. For example, a benchmark may lead an investor to certain biases (intended or unintended) in terms of interest rate exposure, sectoral exposure, and the like. If an investor does intend to bias a portfolio in a particular way, the manager can be directed to invest with the appropriate bias in mind – a benchmark index does not need to be in place to facilitate this. For example, duration exposure could be tightly controlled without the need for a traditional benchmark to play that role in portfolio construction.

The whole pitch to investors is therefore changed. Instead of outperforming a benchmark with minimal tracking error, success is defined as delivering the targeted return in the context of specifically targeted risk exposures that are tailored to bond investors, not to an index provider’s rules that may instead advantage bond issuers. The trade-off is that the manager has full access to global fixed income markets to construct portfolios that fulfill these goals.

This is what absolute return fixed income managers seek to achieve. Truly active management should mean managers are not beholden to arbitrary benchmarks. End investors can access a portfolio where expected returns and risk tolerances are carefully defined, and the following issues are ameliorated:

At Daintree Capital, we ignore market benchmarks. Such benchmarks are flawed constructs that do not allow for adequate risk management, do not account for the market environment or for client needs and objectives, and indeed encourage perverse manager behaviour. Instead, we assess our performance by aiming to consistently deliver our target return, while taking as little risk as possible. We never sit still: that means always looking for the most effective way to achieve our target return with minimal risk.

Disclaimer: Please note that these are the views of the writer and not necessarily the views of Daintree. This promotional statement does not take into account your investment objectives, particular needs or financial situation.