10 year US government bond yield cracked 3% – what next?

The 10-year US government bond yield has traded around (and briefly above) 3% in recent days, the highest levels since the “taper tantrum” of 2013. In a narrow economic/financial sense, we do not see any special significance with the current level of yields, but more broadly we see higher interest rates as an inevitable consequence of the normalisation path that the US Federal Reserve has been on for some time now, a view we have maintained since we last covered this topic in February.

When viewed over a much longer timeframe, interest rates have been falling around the world for the best part of 30 years, reaching a low of about 1.4% for a 10-year US Treasury in 2016. In this context, the moves to 3% represent continued, albeit modest, evidence that this multi-decade “bull market” in bonds has come to an end. At the very least, the sustained downtrend in yields has been halted. 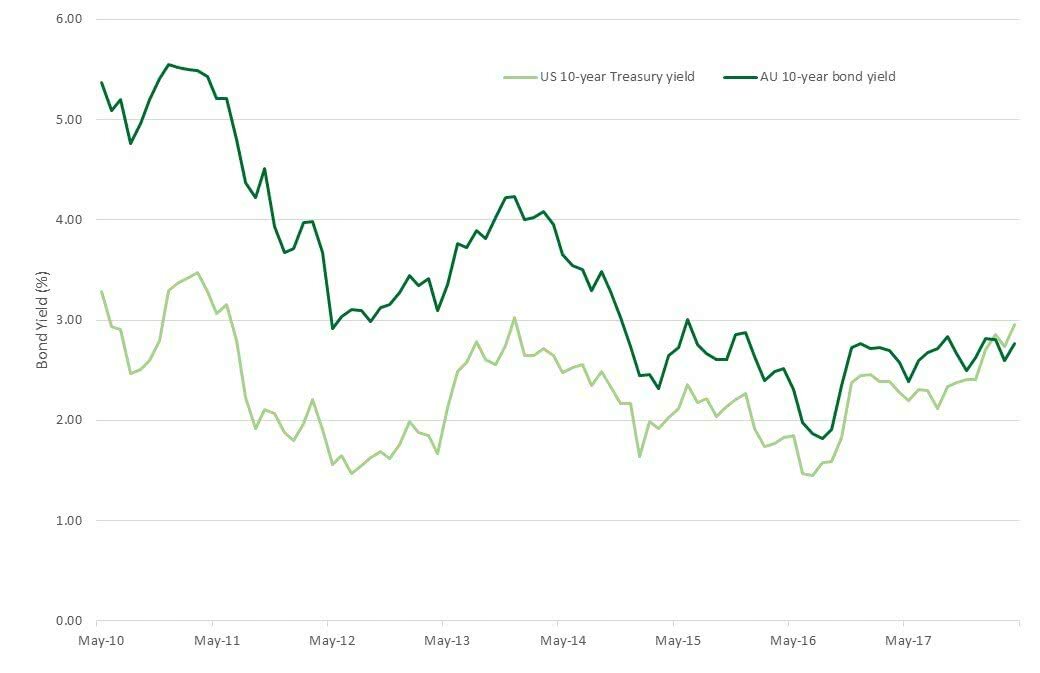 When we discussed US Treasury yields a few months ago, we concluded that the most likely path for interest rates was gradually higher. Our view in this regard has not changed. However, since then, commodity and energy prices have risen on the back of solid global demand, which is supportive of the growth outlook. Meanwhile, trade discussions threaten to morph into outright trade wars, and the United States has unilaterally withdrawn from an important agreement with Iran that has led to wider instability in the Middle East.

While the medium-term outlook is arguably less clear than it was just a few months ago, ultimately we believe the global economy has enough momentum to absorb near-term uncertainty. With neutral interest rates now so much lower than in previous cycles though, we also see it as unlikely that interest rates return to previous cycle highs in excess of 4% any time soon.

In light of this outlook and in accordance with our near-term view, we maintain a very limited exposure to interest rate risk. In contrast to some fixed income ETFs where modified duration exposure can be as high as 6.1 years, the Daintree Core Income Trust has a modified duration of only 0.2 years. This makes the Daintree Core Income Fund an ideal choice for investors who want capital stability in addition to steady income. .

This is the view of the author, Brad Dunn Senior Credit Analyst, Daintree Capital.